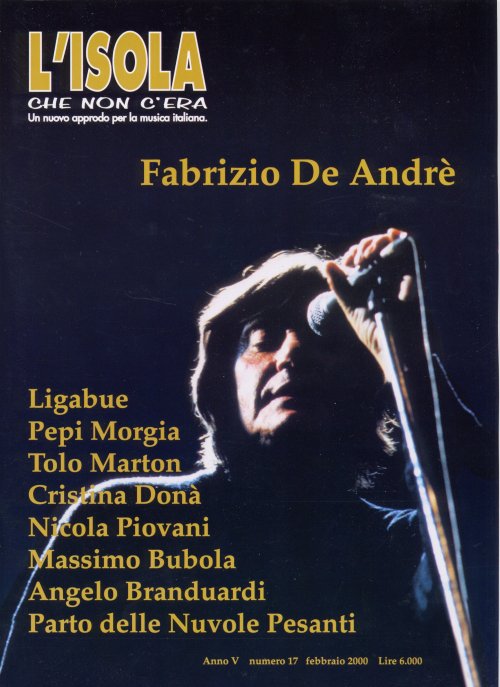 SONGS BY FABRIZIO DE ANDRÉ
Fabrizio de André was born in Genoa on 18. February 1940. His father welcomed him to the world by playing Gino Marinuzzi's "Country  Waltz" on the home grammophone. Twenty-five years later, Fabrizio de André would set his "Waltz for a Love" to the same tune.
When the war broke out, the De Andrés had to seek refuge in a  country farm near Revignano d'Asti, in Piedmont. Fabrizio's father, who was an Anti-fascist and was pursued by the police, joined the Maquis. In 1945 the De Andrés came back to Genoa. Fabrizio went to the primary  school, first at the Marcellian Sisters' School and, later, at the Cesare Battisti public school. He attended then the Gymnasium and, after his school-leaving examination, he enrolled in the Law faculty of the University of  Genoa; but he did not graduate (when only six  examinations were
left, he gave up).

Fabrizio de André had a strong feeling for music; he practised first the violin, then the guitar, and joined a number of local jazz bands (jazz was his "first love"). His career as  a songwriter and performer began in the late fifties, under the strong influence of the French chansonniers, especially Georges Brassens (1921-1981), whose songs he admirably translated into Italian and sung together with his first own songs.
In 1958 Fabrizio de André recorded his first two songs, "Nuvole Barocche" ("Baroque Clouds") and "E fu la notte" ("Then night came"); in 1962 he married Puny Rignon, a Genoese woman nearly ten years older, and the  same year, the couple had their first and only son, Cristiano, who would
follow his father's steps and become a musician and a songwriter.
In the following years, Fabrizio de André writes a number of songs which make him known by a larger public and become soon his "classics": "La guerra di Piero"("Peter's War"), "La ballata dell'eroe" ("A ballad for a Hero"), "Il Testamento" ("The Will"),"La Ballata del Michè" ("The Ballad of Poor Mike"), "Via del Campo" ("Girls from the Narrow Lane"), "La canzone dell'amore perduto" ("Song for Love Lost"), "La città vecchia"  ("Downtown"), "Carlo Martello ritorna dalla battaglia di Poitiers" ("Charles Martel on his way back from Poitiers",  written together with his friend Paolo Villaggio), and "La canzone di  Marinella" ("A song for Marinella"). In 1968, "Marinella" was recorded and sung by one of the most celebrated Italian singers, Mina, and its author was  greeted as the most important Italian "cantautore".
Fabrizio de André's first LP, "Volume I", was issued a short time later (1968), followed by "Tutti morimmo a stento" ("All of us died with pain") and "Volume II"; both LP's reached soon the top of the Italian  hit-parade.

In 1970 Fabrizio de André wrote "La Buona Novella", a concept album based on Christ's life as told in the Apocrypha. This album, and especially the song "Il Testamento di Tito" ("Titus' Will"), in which one of the thieves crucified together with Jesus confutes violently the Ten Commandments, was a serious "blow". Fabrizio de André, who was an atheist and an anarchist, had written a number of songs (like "Preghiera in Gennaio", "A Prayer in January", and "Si chiamava Gesù", "His name was Jesus") in which he showed a Christian-like spirit, and these songs were also sung in parishes and churches; "Titus' Will" was not.
In 1971 Fabrizio de André wrote another celebrated concept album,  "Non al denaro, non all'amore, né al cielo" ("Not to money, neither to love or heaven"), based on Edgar Lee Master's "Spoon River Anthology"; the LP was introduced by an interview to Fernanda Pivano, the first Italian translator of the "Anthology" and one of Cesare Pavese's most intimate friends.
The name of Fabrizio de André began to be associated with literature and poetry, and some of his songs found their way in school books.
In 1973 Fabrizio de André wrote his most "political" album, "Storia  di un Impiegato" ("Story of a White-collar"); the following year, De André issued "Canzoni" ("Songs"), a collection of his translations from Georges  Brassens, Leonard Cohen and Bob Dylan. The album also included a number of his  old songs from the sixties.

In 1975 Fabrizio de André (who, in the meanwhile, had divorced his wife Puny and started a relationship with the folksinger Dori Ghezzi) wrote together with another famous Italian songwriter, Francesco de Gregori, his "Volume VIII". With this album, De André breaks off with his "tradition" to find new ways for his poetry and music. The lyrics show how deep is the influence of modern poetry on De André's work. 1975 marks a real change in De André's life: he begins to perform a series of memorable concerts (after his first performances of the early sixties, he had always refused to appear in public except for a couple of TV broadcastings), and plans to move to Sardinia together with his new love. To this purpose, he buys the Agnata homestead, near Tempio Pausania, in Northern Sardinia, and devotes himself to farming and cattle breeding.
In 1977 the couple has a daughter, Luisa Vittoria (called "Luvi"), the following year Fabrizio De André issues a new LP, "Rimini". Most songs included in this album are written together with a young Veronese songwriter, Massimo Bubola.

1979 is another milestone in De André's life. The year begins with a series of famous live concerts from which a double LP is drawn; De André is accompanied by one of the most renowned Italian pop bands, the Premiata Forneria Marconi (PFM). At the end of August, a most striking episode occurs: Fabrizio de André and Dori Ghezzi are kidnapped for ransom  by a gang of Sardinian bandits and held prisoners in the inaccessible Supramonte mountain. The couple is released four months later; no ransom is paid. When the bandits are arrested by the police, De André, though called to witness before the Court, refuses to denounce his kidnappers and declares his own solidarity with them. "They were the real prisoners, not I". This declaration is a good specimen of De André's way of thinking.
This dramatic episode, and the hard life of the Sardinian people, gave him inspiration for his following album. The album is anonymous, but, from the image of a Redskin appearing on the cover, the mass-media call it "The Indian".
In 1984 Fabrizio de André turns to his native Genoese dialect and writes, together with Mauro Pagani, one of his most celebrated albums, "Creuza de mä". The songs are a tribute to traditional music from all Mediterranean countries. The album is awarded an unending series of prizes and is
greeted as "the best Italian album of the eighties".
In 1989 Fabrizio de André marries Dori Ghezzi; the following year a new album is issued, "Le Nuvole" ("Clouds"), which includes two more songs in the Genoese dialect, one in the Gallurese dialect of Northern Sardinia ("Monti di Mola") and one in the Neapolitan dialect ("Don Raffaè").
A new series of triumphal live concerts follows, from which a double LP ("1991 Concerts") is drawn.

In 1992 Fabrizio de André starts a new series of live concerts, performing in a number of theatres for the first time.
Fabrizio de André's last original album, "Anime Salve" ("Saved Souls"), was issued in 1996. It is a sort of "spiritual will", including songs as "Khorakhané" (dedicated to the Rom people), "Disamistade" (which has been translated into English and sung by the Walkabouts) and "Smisurata preghiera" ("An Infinite Prayer"), based on the Argentinian writer and storyteller Álvaro Mutis' "Topman Maqroll's Saga". Fabrizio de André  also sung a Spanish version of this song.
In 1997 Fabrizio de André started a new series of theatre concerts and a new song collection, called "M'innamoravo di tutto" ("I fell in love with everything") is issued. This tribute album includes a version of "La canzone di Marinella" in duet with Mina. The "Anime salve" concert tour goes on up to the late summer of 1998, when Fabrizio de André must stop at the first symptoms of a serious disease which is later diagnosed as cancer.
Fabrizio de André dies in Milan on 11. January, 1999, at 2:30 am.
Two days later, he is buried in his native town, Genoa; the ceremony is attended by an immense crowd of about 10,000. Fabrizio de André rests in the monumental Staglieno cemetery, in the De André family chapel.